1 It was just before the Passover Feast. Jesus knew that the time had come for him to leave this world and go to the Father. Having loved his own who were in the world, he now showed them the full extent of his love. 2 The evening meal was being served, and the devil had already prompted Judas Iscariot, son of Simon, to betray Jesus. 3 Jesus knew that the Father had put all things under his power, and that he had come from God and was returning to God; 4 so he got up from the meal, took off his outer clothing, and wrapped a towel around his waist. 5 After that, he poured water into a basin and began to wash his disciples’ feet, drying them with the towel that was wrapped around him.

12 When he had finished washing their feet, he put on his clothes and returned to his place. “Do you understand what I have done for you?” he asked them. 13 “You call me ‘Teacher’ and ‘Lord,’ and rightly so, for that is what I am. 14 Now that I, your Lord and Teacher, have washed your feet, you also should wash one another’s feet. 15 I have set you an example that you should do as I have done for you. 16 I tell you the truth, no servant is greater than his master, nor is a messenger greater than the one who sent him. 17 Now that you know these things, you will be blessed if you do them. 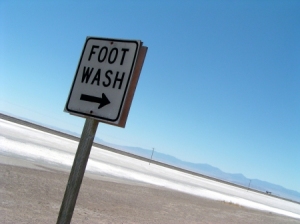 People wore sandals and did most of their travel on foot in Jesus time, walking along dusty trails with animals, and I’m sure that guests arrived with more than dust on their feet. The most demeaning task in Jesus’ time was to wash the guest’s feet, and it was a common courtesy for the host to have the lowest slave wash the guest’s feet as they entered the house. Jesus had sent Peter & John ahead to make the arrangements for their meal together. The food had been cooked, the table had been set, and I’m sure the disciples expected this detail, of having a slave ready to wash their, to have been taken care of as well. It wasn’t, there is no slave ready to wash their feet as they enter the room. May be they paused as they enter, looking around for the slave only to see a towel & water basin. So they recline at the table, with that awkward uncomfortable silence, each looking at the other and thinking, “Somebody ought to at least wash Jesus’ feet, but if I do that, it would put me at the bottom of the social pecking order. If I volunteer I’ll get stuck with that job from now on, if I just wait somebody else will do it. So Jesus stands before His disciples and rather than begin with a sermon he gives them an example.

He left his Comfort Zone. He made his body do something it may have not wanted to do. We want to see service as something glamorous, but the truth is often it’s washing a pair of smelly feet, and when that is dome there are 10 more pairs waiting. To be a servant you have to first get up.

To serve others we usually have to lay something aside, we live in a world where most of us already have a full plate of activity. If I’m going to add a service for somebody, I usually have to subtract something, often something I would like to do just for myself. Every servant has to deny himself something in order to have the time & energy to give to others.

He made preparations to meet the need. Many of us are unwilling to prepare to serve, sometimes the towel is studying God’s word in order to be prepared to serve others. Sometimes it getting trained or being teachable. We prepare for careers, putting other things aside, some of which would have been fun, but wouldn’t have help prepare us. What are you doing to be prepared to serve.

Are we ready to serve? Are there feet that Jesus wants us to reach out and touch? Or are we look around for someone else to do that? Whose feet are you really focused on, yours or others, what will you choose, selfishness or servanthood?